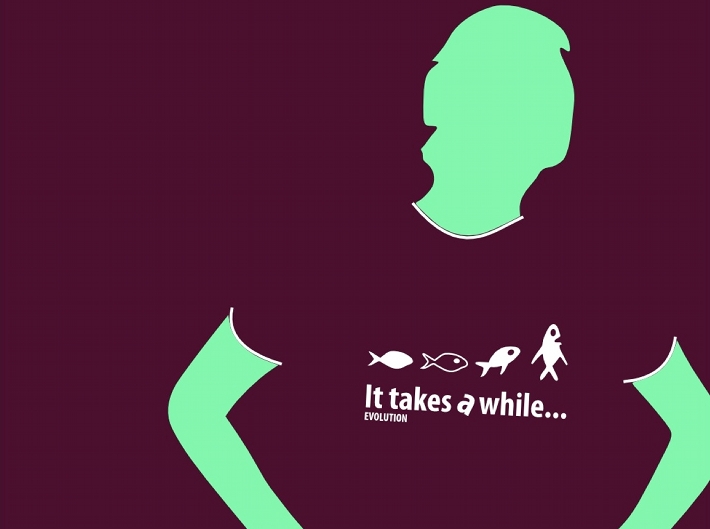 With the P!INK SCIENCE project we wanted to create public awareness and a better understanding of some fascinating scientific topics. The project was realized as part of the Cool Science course at Leiden University. We chose t-shirts as a medium to achieve that. P!INK SCIENCE is a series of 5 t-shirts (and labels) explaining the scientific topics evolution, emergence, chaos theory, the uncertainty principle and self-reference. The t-shirts show a simple illustration and slogan and come with little attached labels that explain the topic in a short story using easy language and metaphors from every day life…

The project was realized as part of the ‘Cool Science’ course of the Media Technology MSc programme at Leiden University. The scientific topics we included in the designs of our t-shirts are: evolution, emergence, uncertainty, chaos and self reference.

Have a look at what the labels say: 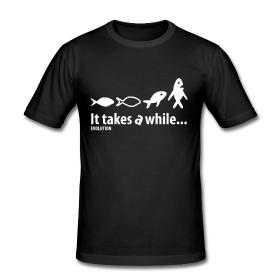 When you buy a shirt you will probably buy one that fits you well, right? It is not just the biggest or strongest shirt, but one that fits you well. We can also see this concept in evolution and it’s called survival of the fittest. Whatever fits the environment best survives – not the biggest or the strongest. The theory of evolution simply describes how mutation, reproduction and selection lead to adaption of species to the environment over generations. This process takes many years and the outcome is always unknown. That’s because evolution itself doesn’t have a plan or purpose, it just is.

Who is telling th 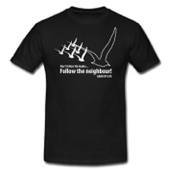 e birds to fly in formation? Are they just following a leader? Or did they read a freaking manual? One thing we know for sure is that there is no leader. Presumably there also is no manual, but still patterns seem to emerge in the sky. So how does it work? The birds steer towards the average heading and position of the neighbor birds while avoiding crowding. So they don’t follow the leader, but their neighbors. This shows patterns can emerge from simple low level interactions between many individuals following the same rules. OF course this doesn’t only apply to birds. Many examples can be found in nature and even nerd science. Examples are schools of fish, termites building hills and Conway’s Game of Life. What do they all have in common? Definitely no miracle occurs. 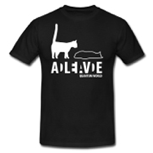 Have you ever seen a cat dead and alive at the same time? Presumably you didn’t. That would be a bit strange, wouldn’t it? You are now most likely wondering what cats have to do with the quantum world. The link can be found in a thought experiment called Schrödinger’s Cat. In quantum mechanics, which is merely about the tiny world of atoms, an atom can be at many places at once and do many things at one. It’s as if you are in Leiden during a lecture and also at home working on a project at the same time. However, this property only applies to really really tiny things. Schrödinger proposed a scenario with a cat in a sealed box, where the cat’s life or death was dependent on the state of a subatomic particle. With this experiment he translate this tiny world into the real world illustrating the bizarreness of quantum mechanics. 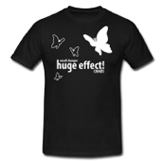 aring this shirt will change your looks, but could it also change the world? Just as a butterfly on one side of the globe might cause a tornado on the other side? This is called The Butterfly Effect: small changes can cause huge effects. While scientists are not completely sure whether this also applies to nature, one thing is certain: in mathematics chaos theory describes behavior of dynamical systems that are highly sensitive to initial conditions. In normal English, small differences in the beginning of chaotic process cause huge differences in the end, so uncertainty about the initial values makes the outcome very hard to predict. So try it, wear the shirt and see what happens!

Did you look i 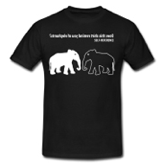 nto the mirror to see if this short looks good on you? Probably. Looking into the mirror and recognizing oneself is something which was long claim to be exclusively for humans. But it turns out there are also animals capable of recognizing themselves. One of those are elephants. Researchers put paint on an elephant’s head before exposing it to a giant mirror. The elephant then somehow knew the image in the mirror was a reflection of itself and used its trunk to remove the paint. Having a concept of the self or something referring to itself can lead to peculiar structures; for example in natural language, computer languages and mathematics. Like the question: “Does this sentence remind you of elephants?”. These phenomena can even lead to paradoxes like: “This is not a sentence.” Self-reference also plays an important role in DNA, not only elephants DNA but everyones!